oh I broke a nail. why tonight?

I was all ready to post a nail post for those asking about my nail care routine when I went to the grocery store, unloaded my cart and went to grab it without looking and doh!  My nail broke and I couldn’t believe it because they had been doing so great!

Fast forward many months later when I’m finally pushing this post live where my nail has grown out and then some.  So where should we begin…?  It all starts with cuticle care.  One of the things that I do is carefully push back my cuticles while still standing in the shower.  The water has long softened them enough and it just takes a few seconds!  For those times that you need additional help, I found this really curious product at Ulta. 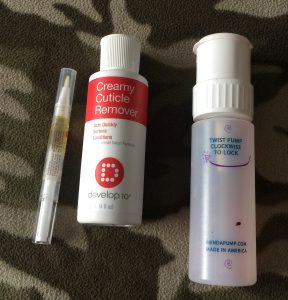 When I bought it, I thought it might be more of a gel or a runny cream.  I was NOT ready for it to look like this!

You know what though? It works, it really does.  I dot the product on one hand and then touch the other hand’s nails to the blobs.  After spreading it out on each cuticle lightly, wait a few seconds and then start to push back the cuticles very lightly.  It gets an almost grippy texture to grab the cuticle to push it back.  It really does work great and now I wonder what I did without it.  I often do this step prior to removing the nail color and the polish remover helps to remove any leftover material so the nail plate is clean and ready for polish.

For nail polish remover, I used to use a non-acetone formula.  Note the USED TO.  The non-acetone formula took longer to remove polish, but it was worth it because it didn’t dry out my nails.  I can no longer find the non-acetone remover and omigosh are my nails complaining! Right now, my nails can use the most help they can get.  I’ve taken on my colder month routine 100% until I can find the non-acetone remover again.  This means repeatedly coating my bare nails with a nail oil especially after washing my hands. If I can, I’ll do this intense oil treatment for a couple of days.  I have a nail oil pen in my nightstand, in my purse, next to my spot on the sofa, everywhere, especially now!  I even refilled two of them last night!  When I’m finally ready to polish them, I swipe the nail surface quickly with the polish remover and paint away.

One thing I’ve found is my nails do better when they have polish on them.

I used to be able to wear polish for such a long time before a chip occurred, but within the last couple of years, regular nail polish chips in about three days!  I have no idea what has changed, but I kept trying other products to see whether I could find a combo that worked.  Finally, success! For polish, I’ve been really loving OPI Infinite shine polishes (the one that doesn’t require a UV light to cure and soaking to remove).  I’ve tried UV gel polish before and while it looks nice, it really dries out my nails.  Then I’m back to square one of growing them out again.  For me the Infinite Shine lasts at least 10 days with zero chips, longer if I’ve been using more care when using my hands. (rubber gloves with dishes, hand cream and nail oil heavily between polishing)

We’re on the homestretch!

This next step is where I noticed the biggest difference in my nails.  Every night, I apply a cuticle/nail crème.  What happened was this:  I put lip balm on every night.  I started to notice that the nail I dug out the balm from the pot started getting really healthy!  It rarely broke or split!  It was markedly thicker than my other nails too so I thought, “hey, start using that nail creme in the nightstand that’s been going unused!”  It worked.  The one I use is Christian Dior Crème Abricot Fortifying Cream for Nails.  Warning:  it’s super thick, emollient and sticky.  On the one hand this is a good thing!  You want it to stay on, but it also means this is not something you want to apply during the day as it would get all over everything you touched!  I have pet the Furry Son before falling asleep and pulled back a completely a FS covered hand.  I won’t lie.  I don’t think he enjoyed it either.  In the morning you won’t notice the stick at all and your nails will be growing in no time!

I hope this post helps.  Yes.  It might sound like a lot of steps, but after a while it becomes a no-brainer like flossing my teef.  I recently caught my thumbnail on my shoe when trying to put it on and it ripped my nail and broke into the quick.  Like far down and there was nothing to do, but glue it until it grows out to the point where I can clip it off.  Talk about ouch.  And sigh.  I really need to find a non-acetone remover again.

Note:  I have recently heard Dior is discontinuing the nail crème.  The horror.  I am hoping they meant “reformulating” instead of discontinuing.  I wonder if this is why I had a really difficult time trying to find a replacement for the one I finally finished. (ALSO: none of the links are affiliate links, I just thought I’d make your life easier by including them.)